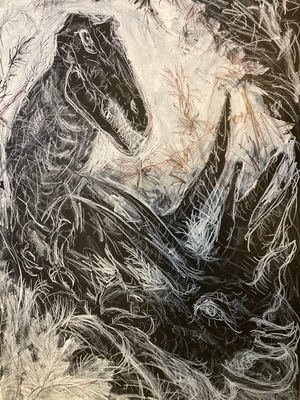 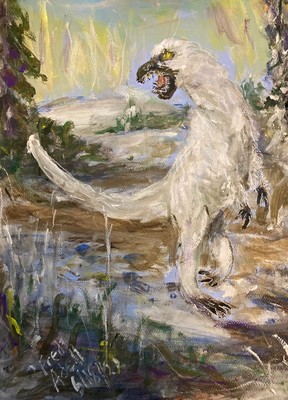 Literally meaning "Polar Bear Lizard", Nanuqsaurus inhabited the Arctic coasts of (what are now) Canada & Alaska some 70 million years ago, It evolved adaptations such as a thickly feather coat (most likely white) for insulation against the frigid temperatures to be encountered at that latitude .Mesozoic Era, Cretaceous Period. 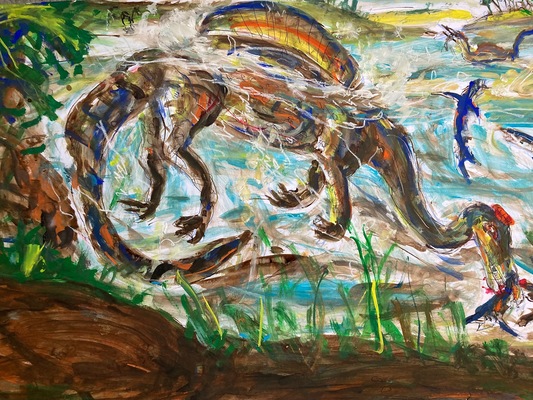 This sail-backed carnosaur actually specialized in a diet of fish (including small sharks) lurking in coastal wetlands of what is now North Africa (Egypt to Morrocco) over 90 million years ago...It was among the largest of the predatory dinosaurs, exceeded in size only by Giganatosaurus of southern South America. Mesozoic Era, Cretaceous Period. 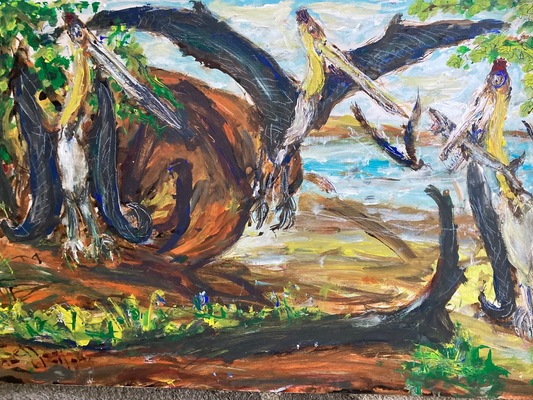 At a total mass of over 200 lbs., and a wingspan of approximately 30 ft., Quetzalcoatlus (named after a Toltec serpent god) would've needed a very strong thermal to be airborne, and much of the time it walked on land, stalking prey like a Marabou Stork (Leptoptulus crumeniferus) would.Those living along a coast would include fish (as depicted here in their diet, while inland populations would've hunted smaller reptiles (perhaps primitive mammals as well) that they could grab. A type of pterosaur (pterodactyl kin), Quetzalcoatlus lived about 70 million years ago in (what is now) Texas and northeastern Mexico. Mesozoic Era, Cretaceous Period. 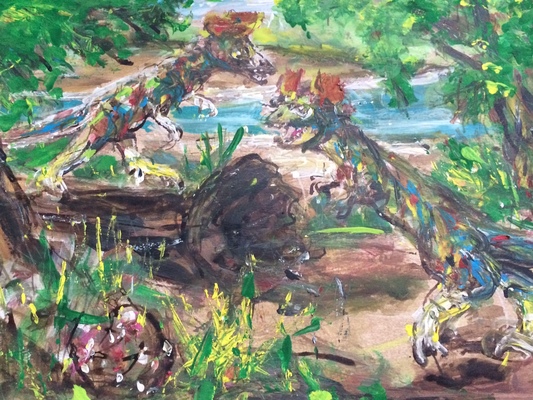 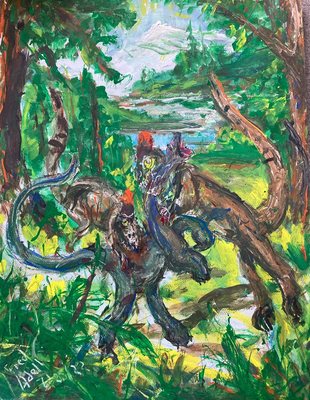 .Fossils of both (about 200million years old) were discovered in Antarctica, which at the time they existed was 400 miles north of its present location, and had a climate more like New Zealand (temperate rainforest along the coast, snow-capped mountains inland). "Cryolophosaurus" means "Icy Crested Lizard" Mesozoic Era, Jurassic Period. 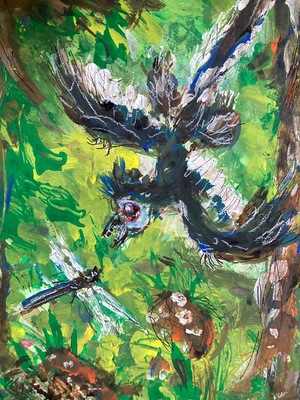 Discovered in limestone deposits in Bavaria, Germany (where it's known as "Urvogel") in the early 19th Century,the Archaeopteryx lived about 150 million years ago. It is considered the first true bird by paleontologists & ornithologists, although the creature retained it. "Archaeopteryx" means "Ancient Wing." Mesozoic Era, Jurassic Period. 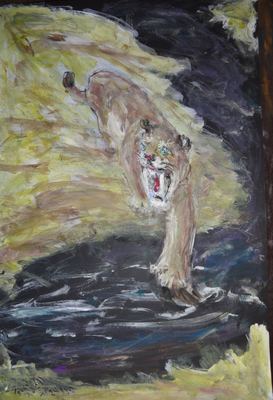 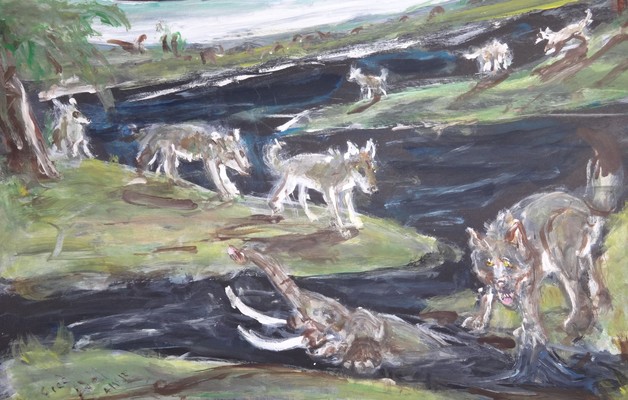 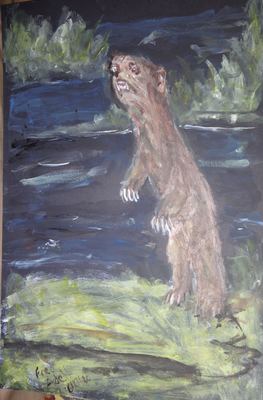 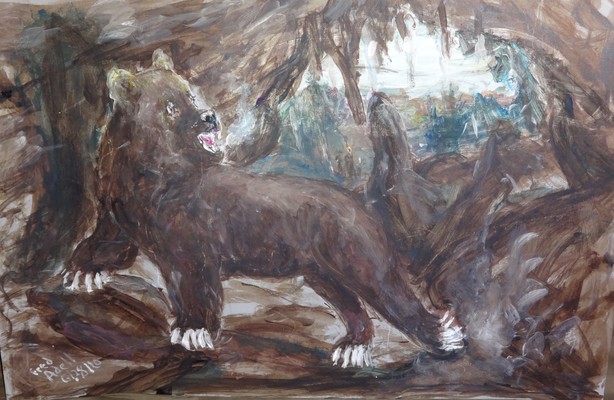 Living from 1.4 Million to 24 Thousand Years ago during the Ice Ages, the Cave Bear inhabited central and northern parts of Europe and Asia. Slightly larger than a Kodiak Bear (Ursus arctos middendorfi). it was primarily herbivorous(plant-eating) in diet Climate change and competition for living space with early Man precipitated its extinction. 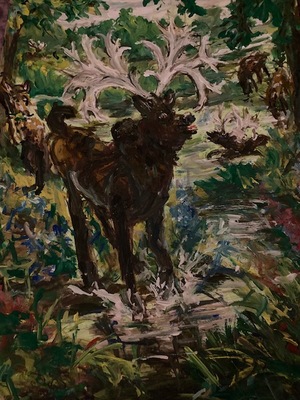 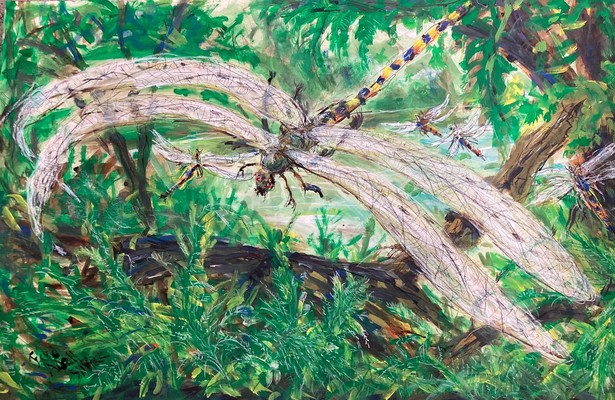 Meganeura (meaning "Great Nerves"* in Ancient Greek) lived in (what are now) Europe and North America during the Carboniferous Period (350-280 Million Years Ago), and had a wingspan of up to 30 inches. It inhabited rainforests of tree ferns and horsetails, feeding on smaller insects (and other invertebrates), as well as small amphibians and perhaps very primitive (early) reptiles.

* Because the veins in its wing membranes resembled nerves. 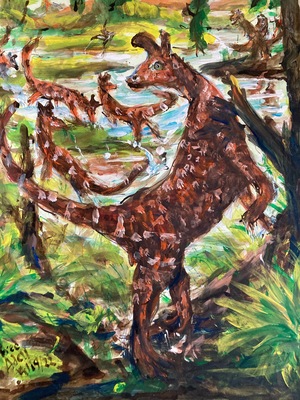